The earliest known iron-working Graves was Cyrus M. who, along with William Hatch, made scythe snaths (handles that attach to the longer pole of the scythe) and hoes in East Leverett, close to the bridge on Roaring Brook. The two men made 10,000 hoes and 30,000 sets of scythe mountings annually from 1850 until 1854 when they both moved to Northampton to work at Bay State Tool Company. Before they left town, in 1853, they exhibited their concave steel hoes as the Mechanic’s Fair in Boston, and many people admired their craftsmanship. 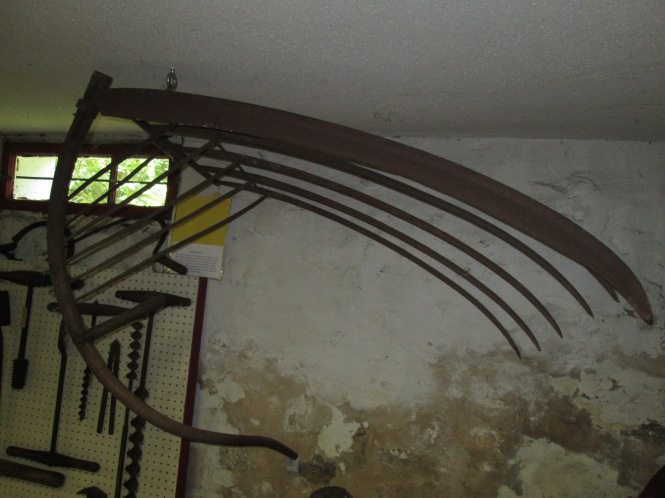 A large rake cradle scythe with a grapevine snath

Upon moving to Northampton, Cyrus M. Graves and William Hatch left their business to Stephen S. Graves and his son S. S. Graves, who was born in 1807. They renamed the business (previously “Graves and Hatch”) “Graves and Sons.” Under this new ownership, production of scythe snath mountings more than doubled–they were turning out 65,000 sets annually. Later, S. S. Graves boosted production to 150,000 sets of snath irons per year.

Another line of Graves–Thomas and then his son Henry–also owned a Gristmill downstream from Asa Moore’s mill, the North Leverett Sawmill. The Graves mill was a pail shop, grain mill, and a manufacturer of scythe snaths and hoe handles. A co-owner, Mr. Porter, sold his interest in the pail and sap bucket shop to Mr. Colton in 1888, and the firm became “Graves and Colton.” This firm was located just over the Leverett line from Montague, and it was nearby the old Graves iron shop, which was based in North Leverett by that point.

The way these wood products were manufactured is similar to how lumber and turnings (any manufactured piece of wood that is curved) were made. The raw materials had to be taken by hand from local forests, and this required special equipment including saws and transportation. Transport was long and arduous, either done by animals such as oxen and horses or by the loggers themselves, who in winter had to pull sleds over packed snow to get the lumber to the mill.

Once at the mill, the wood was cut by an inefficient and slow up-and-down saw which had to stop after each slice and change direction (as opposed to the circular saw, developed after the Civil War, that constantly moves in one direction, thereby saving energy). The loggers had the difficult task of maneuvering the wood onto the bed where it would be cut because they did not have lifting machinery. This involved rolling logs up a ramp to a carriage for cutting and required a lot of manpower.

From there, the cut wood would be mounted on a lathe, which is a stand used for cutting smaller pieces of wood, and different-sized chisels would be mounted to cut the wood as it was turned by a water wheel. Thus the cutting face of the chisel, fastened in place against the spinning wood, gradually carved the wood. Eventually, lathes were made to hold multiple chisels so that different parts of the wood could be sculpted at once. This was how broom and hoe handles were made, along with scythe snaths, which were wooden handles.

Necessarily, this process produced a lot of sawdust which needed removal. Millers usually pushed it into an outdoor pile to be used as fuel for the mill, bedding for animals, mulch, packing material, or insulation for ice to keep it from melting. Unfortunately, though, much of the sawdust was probably left to rot, as it was produced in such large quantities.

The final products of the turning mills were mostly only parts of larger items such as hoes and scythes, which then required then required more labor to turn them into useable products. These pieces were not likely to be hauled long distances because they were so heavy and bulky. Instead, they were mostly turned into local goods or exported to Amherst, Hadley, and other nearby towns. It’s possible but uncertain that they were floated downriver to Springfield or other towns.

It is unclear to what extent the Graves industries of milling and iron-working collaborated to create complete hoes and scythes, but it is likely that the two industries overlapped at some point between 1860 and 1880, if not longer. The Graves family itself was very involved in the town of Leverett and its functioning. Members of the family served in positions as varied as: fireman, selectmen, postmaster, schoolhouse host and district representative, librarian, and phone operator. 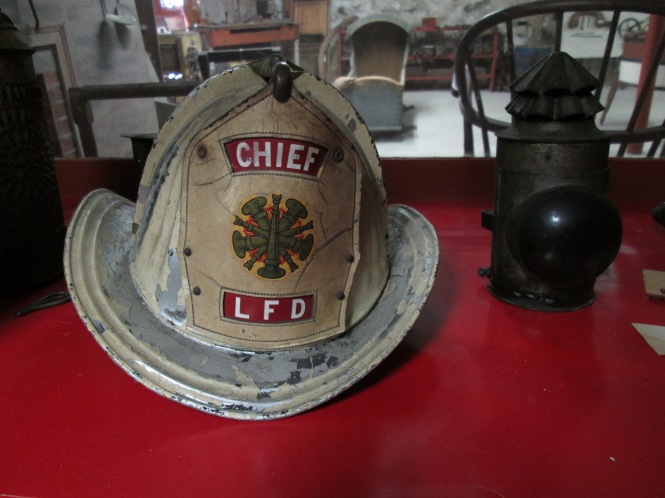